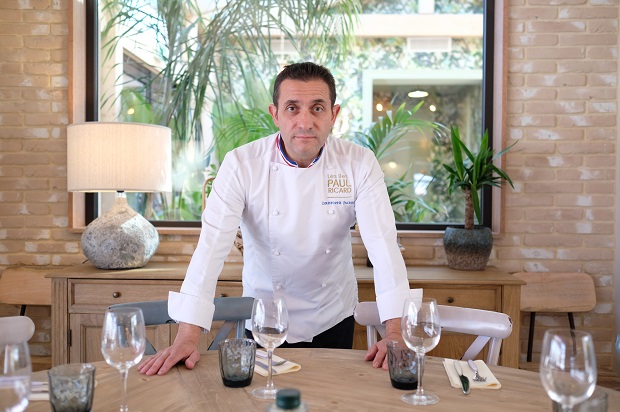 2011 winner of the title “Meilleur Ouvrier de France” (MOF) in gourmet cuisine, Christophe Pacheco excels in his field ! Since 2015, he has breathed new life into the catering of the islands, working in a global and coherent way : overhaul of the offer, selection of producers and partners, recruitment and training of teams…
Anxious to bring the best to our clients in terms of cuisine, he takes to heart to share his knowledge, his passion and his excellency with his collaborators and mostly to the new generation.

Friday the 8th of October took place the national final of the contest « Un des Meilleurs Apprentis de France Cuisine Froide » (best french apprentice in cold kitchen). True revealer of talents, this contest brings every year more than 200 candidates from all around France. The best of them were first selected during departmental and regionales selections. Therefore, 17 finalists were chosen to be judge by an exceptional panel of judges, presided by Jean-François GIRARDIN (MOF 1993 Cuisine Gastronomie et Président de la Société nationale des Meilleurs Ouvriers de France).

Among them, Léa CARILLO, 18 years old, first year student baccalaureate of cooking in Lycée Professionnel Golf-Hôtel de Hyères and doing his apprenticeship in our kitchen with the Chef Christophe Pacheco. With only 2 years of cooking behind him and after very intense past few weeks in training with Christophe and Laurent FERRY, Léo won the title of MAF along side with 4 others candidates.

Last year, it was Hermela who went against those tests. Only 17 years old, she managed her way all the way to the final, along 15 others candidates.

In 2019, she won the 4th édition of concours « Terroir et pêche durables », chaired by our Chef Christophe Pacheco. This contest aims to bring awareness to the student about ressources preservation. In order to have those futurs profesionnals exercing in the respect of nature.

To this day, Hermela still delights the tastebuds of our clients in our restaurant SARTI.

Killian ROSINI, one of the six Gold Medal of 2019 « MAF » promotion

Before them, Killian, also coached by Christophe, won the title of Meilleur Apprenti de France in 2019. He had worked in the kitchens of the various establishments of the île des Embiez.

So, last September on the 28th, Christophe received the badge of Chevalier dans l’ordre des Palmes Académiques. This reward salutes his work in training and mentoring of the new generation for several years now.